The team at Jones-Hamilton Co. are known as experts on pH management in animal production. Explore our library of resources to find insights on maximizing product benefits and poultry litter management best practices. 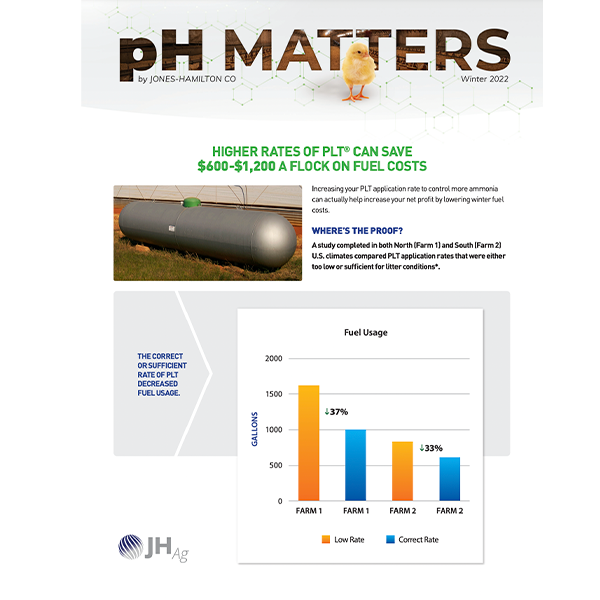 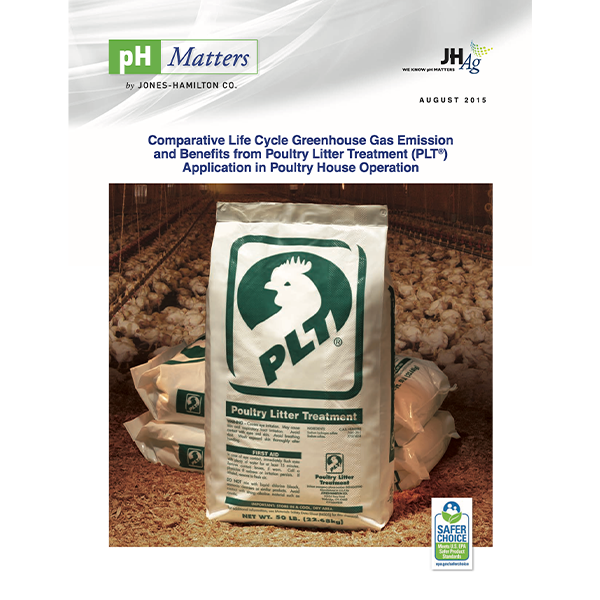 PLT Lifecycle Assessment
This study evaluated the environmental impact of PLT - Poultry Litter Treatment from the production through distribution, and compared it to the environmental benefits of product application. 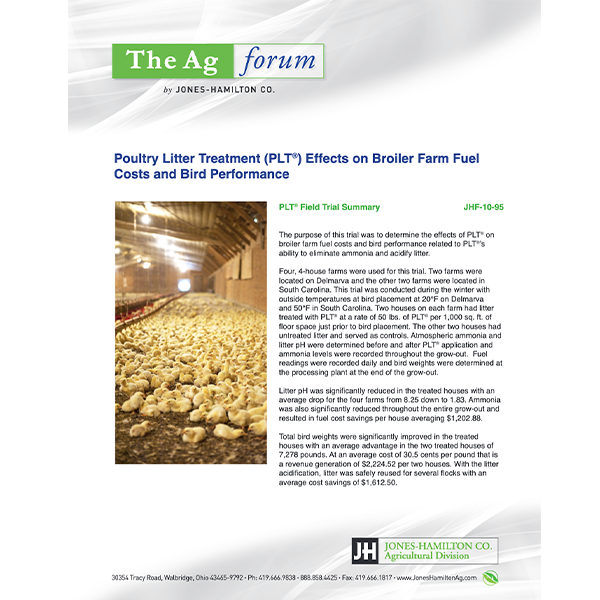 PLT Effects on Fuel Cost and Performance
In this study on the effects of PLT litter amendment on fuel costs and bird performance, the farms that used PLT showed a significant drop in fuel costs due to the elimination of ammonia. Furthermore, bird weights improved generating additional revenue. 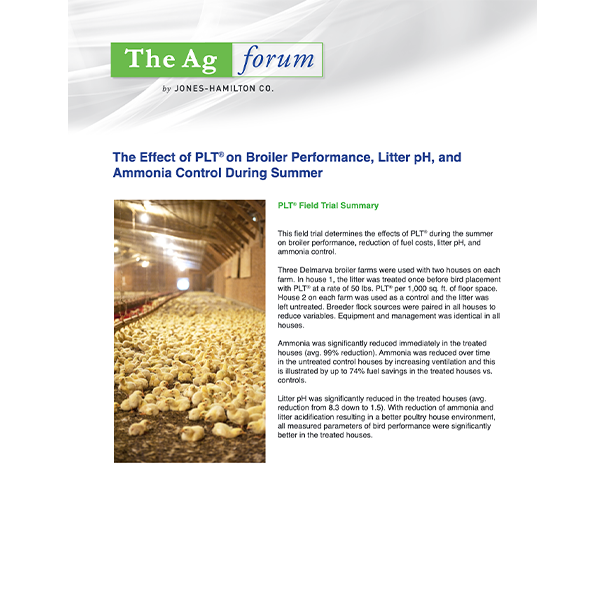 Summer Effect of PLT on Performance, pH and Ammonia
A comparison study of three farms showed the wide reaching effects of PLT litter amendment, including how it significantly and consistently lowered ammonia and litter pH for significant fuel savings during summer months. 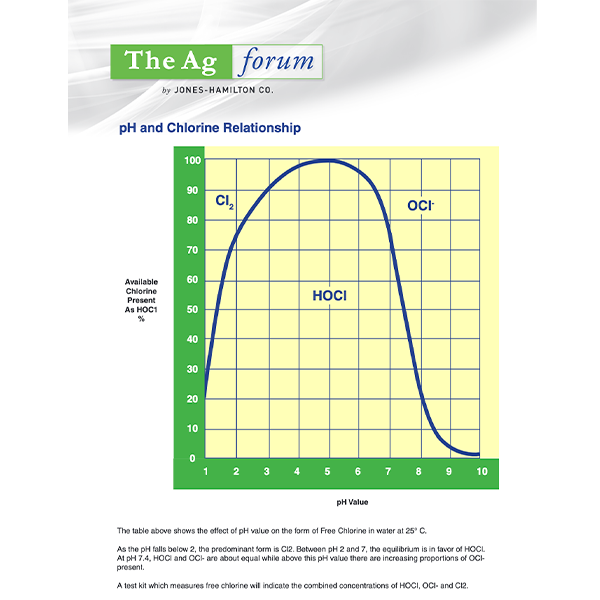 pH and Chlorine Relationship
This graph demonstrates how pH affects the effectiveness of chlorine in water. 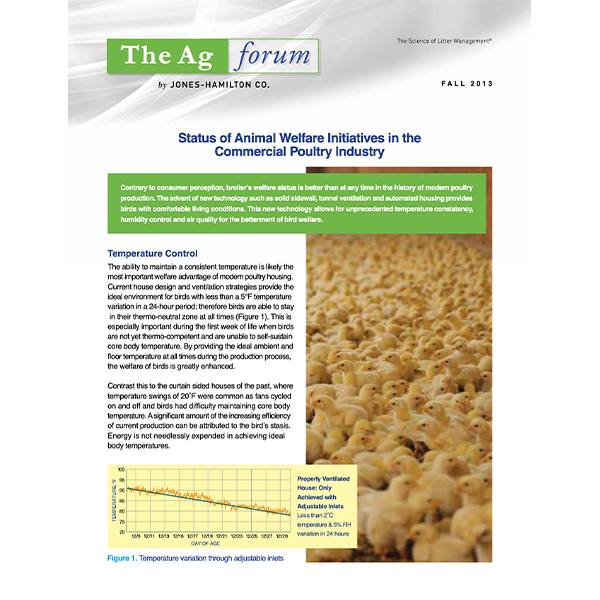 Animal Welfare Initiatives in the Commercial Poultry Industry
Broiler’s welfare status is better than at any time in the history of modern poultry production. The advent of new technology such as solid sidewall, tunnel ventilation and automated housing provides birds with comfortable living conditions. Learn how to adopt and properly implement these technologies. 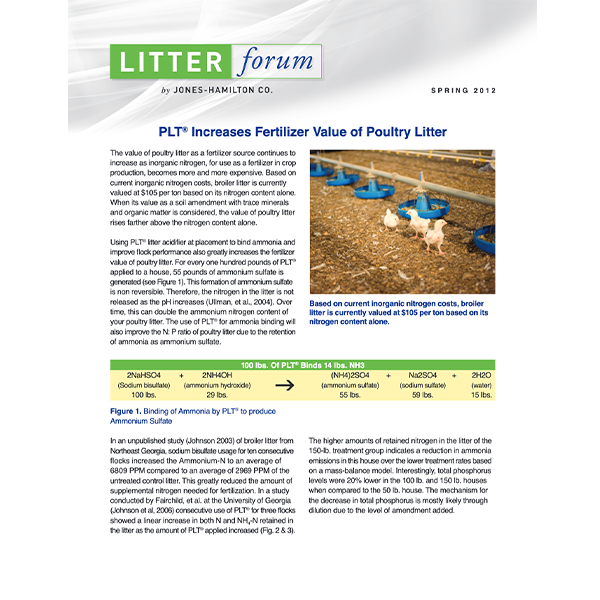 PLT Increases Fertilizer Value of Poultry Litter
Based on current inorganic nitrogen costs, broiler litter is currently valued at $105 per ton based on its nitrogen content alone. When its value as a soil amendment with trace minerals and organic matter is considered, the value of poultry litter rises farther above the nitrogen content alone. 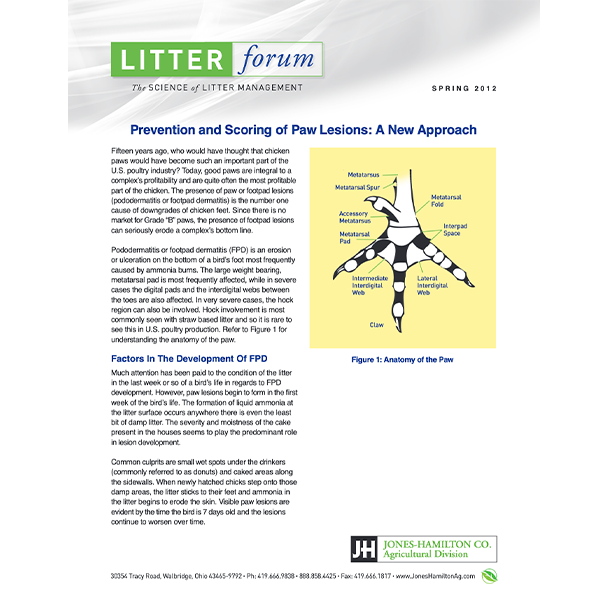 Prevention and Scoring of Paw Lesions
Good paws are integral to a complex’s profitability and are quite often the most profitable part of the chicken. The presence of paw or footpad lesions (pododermatitis or footpad dermatitis) is the number one cause of downgrades of chicken feet and can seriously erode a complex’s bottom line. 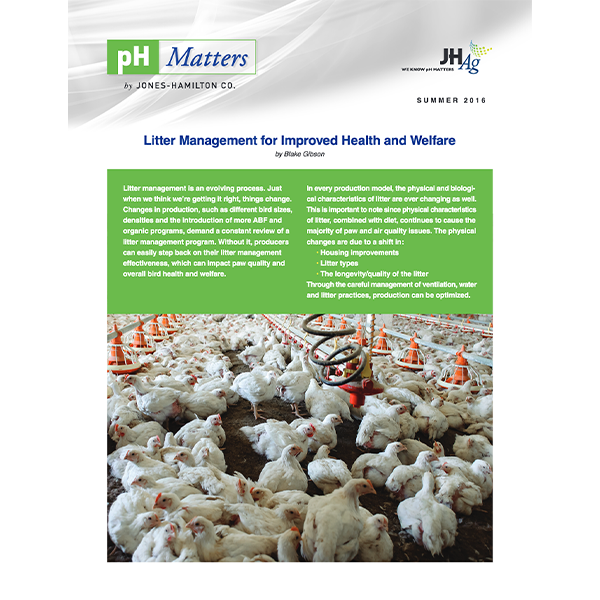 Litter Management for Improved Health and Welfare
Litter management is an evolving process. Without assessing the impact of production changes, producers can easily step back on their litter management effectiveness, which can impact paw quality and overall bird health and welfare. 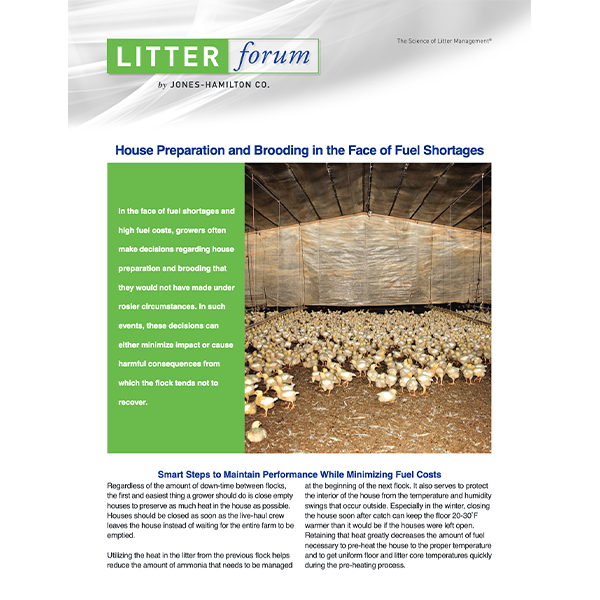 House Preparation and Brooding in the Face of Fuel Shortages
In the face of fuel shortages and high fuel costs, growers often make decisions regarding house preparation and brooding that they would not have made under rosier circumstances. In such events, these decisions can either minimize impact or cause harmful consequences from which the flock tends not to recover. 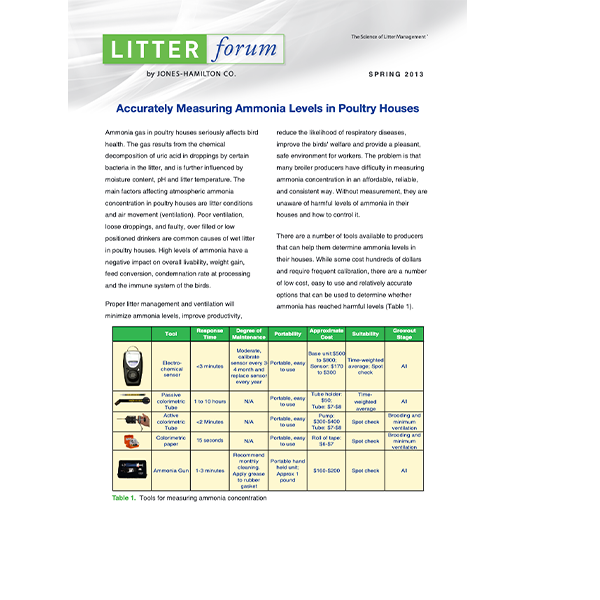 Accurately Measuring Ammonia Levels in Poultry Houses
There are a number of tools available to producers that can help determine ammonia levels in poultry houses. While some cost hundreds of dollars and require frequent calibration, there are a number of low cost, easy to use and relatively accurate options that can be used to determine whether ammonia has reached harmful levels. 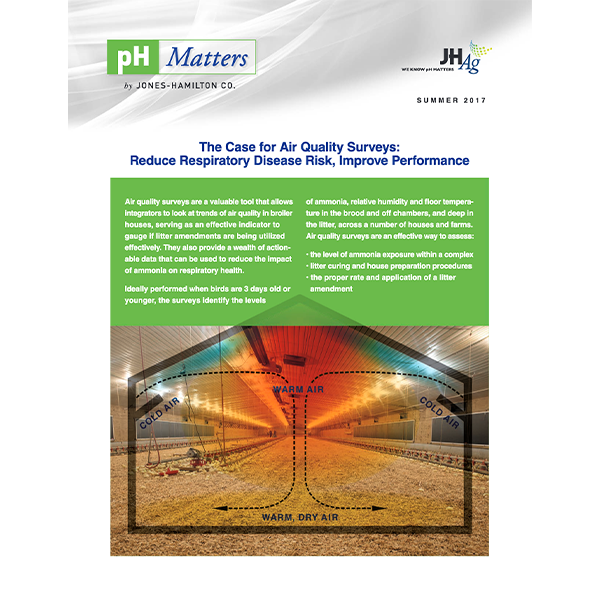 The Case for Air Quality Surveys: Reduce Respiratory Disease Risk, Improve Performance
Air quality surveys are a valuable tool that allow integrators to look at trends of air quality in broiler houses, serving as an effective indicator to gauge if litter amendments are being utilized effectively. They also provide a wealth of actionable data that can be used to reduce the impact of ammonia on respiratory health. 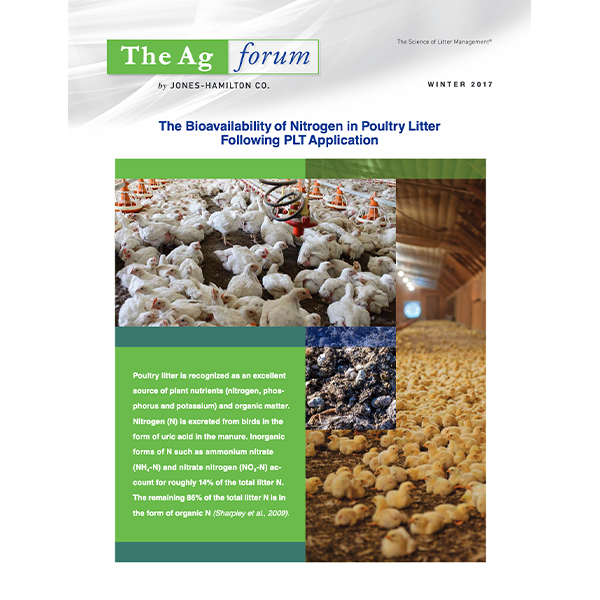 The Bioavailability of Nitrogen in Poultry Litter Following PLT Application
Poultry litter is recognized as an excellent source of plant nutrients (nitrogen, phosphorus and potassium) and organic matter. Nitrogen (N) is excreted from birds in the form of uric acid in the manure. 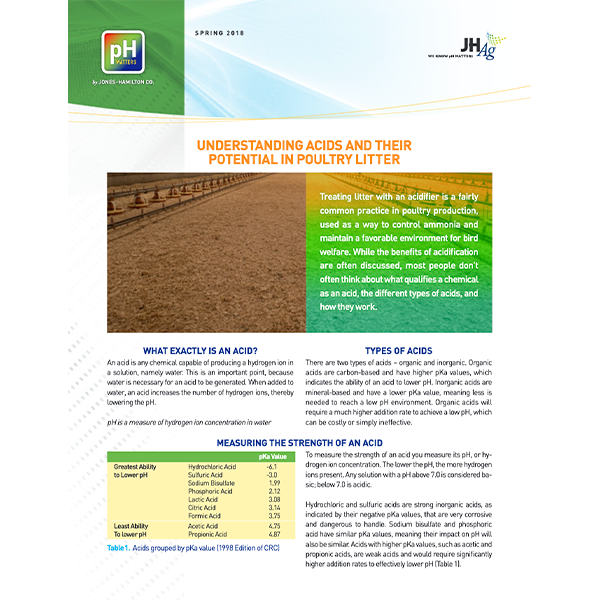 Understanding Acids and Their Potential in Poultry Litter
Treating litter with an acidifier is a fairly common practice in poultry production, used as a way to control ammonia and maintain a favorable environment for bird welfare. While the benefits of acidification are often discussed, most people don’t often think about what qualifies a chemical as an acid, the different types of acids, and how they work. 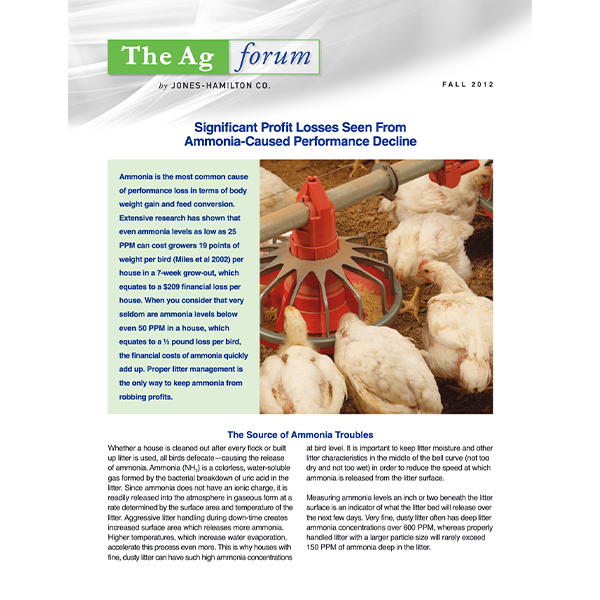 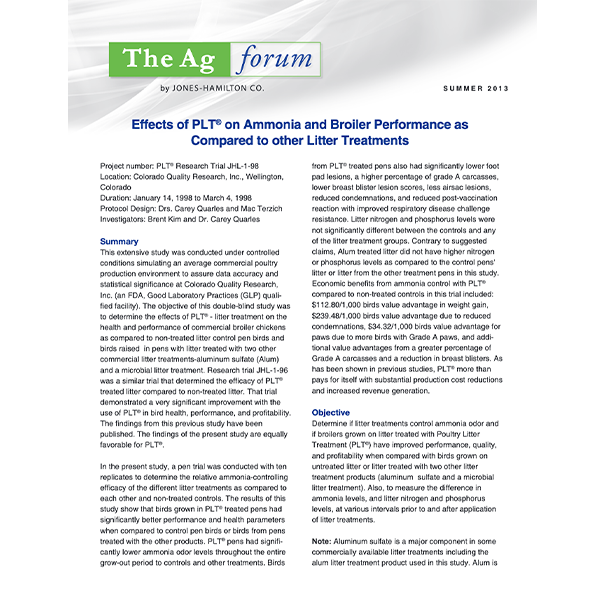 Effects of PLT on Ammonia and Broiler Performance
In a study that compared PLT with two other litter amendments, only PLT-treated houses showed significantly less ammonia. Learn more about the performance of PLT as it relates to condemnations, weight and other factors. 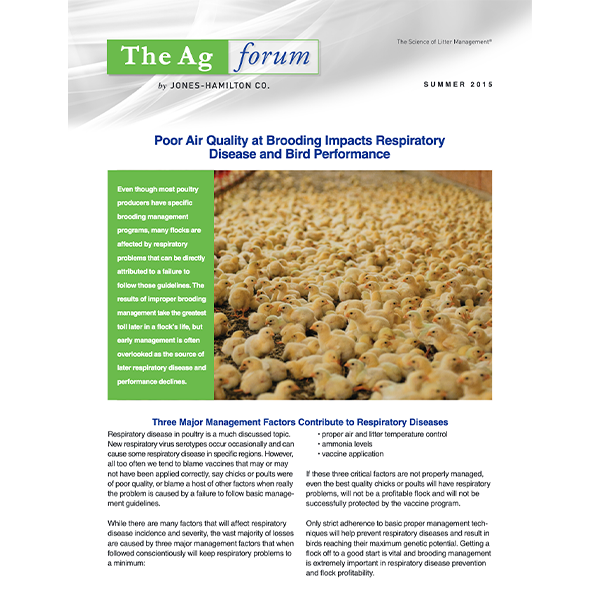 The Link Between Poor Air Quality at Brooding and Poor Performance
Even though most poultry producers have specific brooding management programs, many flocks are affected by respiratory problems that can be directly attributed to a failure to follow those guidelines. Learn about three basic steps to minimize disease and performance loss. 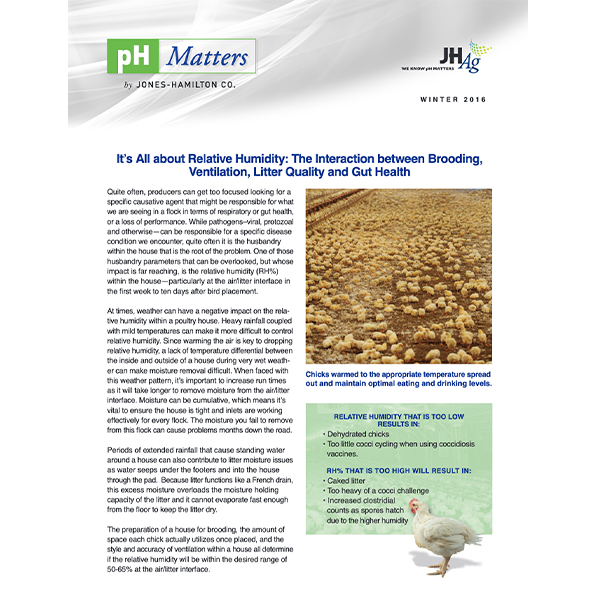 It’s All About Relative Humidity: Link Between Brooding, Ventilation and Litter Quality
While pathogens–viral, protozoal and otherwise—can be responsible for a specific disease condition we encounter, quite often it is the husbandry within the house that is the root of the problem. 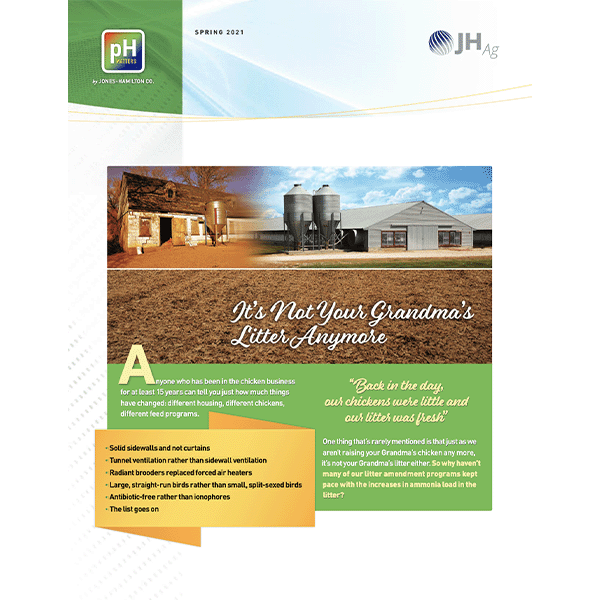 It’s Not Your Grandma’s Litter Anymore: Evolution of Litter since the 1990s
In the last 20 years, things have changed: different housing, different chickens, different feed programs. So why haven’t many of our litter amendment programs kept pace with the increases in ammonia load in the litter?

10 Preguntas Frecuentes Sobra el PLT
Since the launch of PLT in 1994, these are the questions that are asked the most.
« Previous Page 1 2 3 Next Page »
Missouri